Year in review; Top tech news from the turbulent 2020 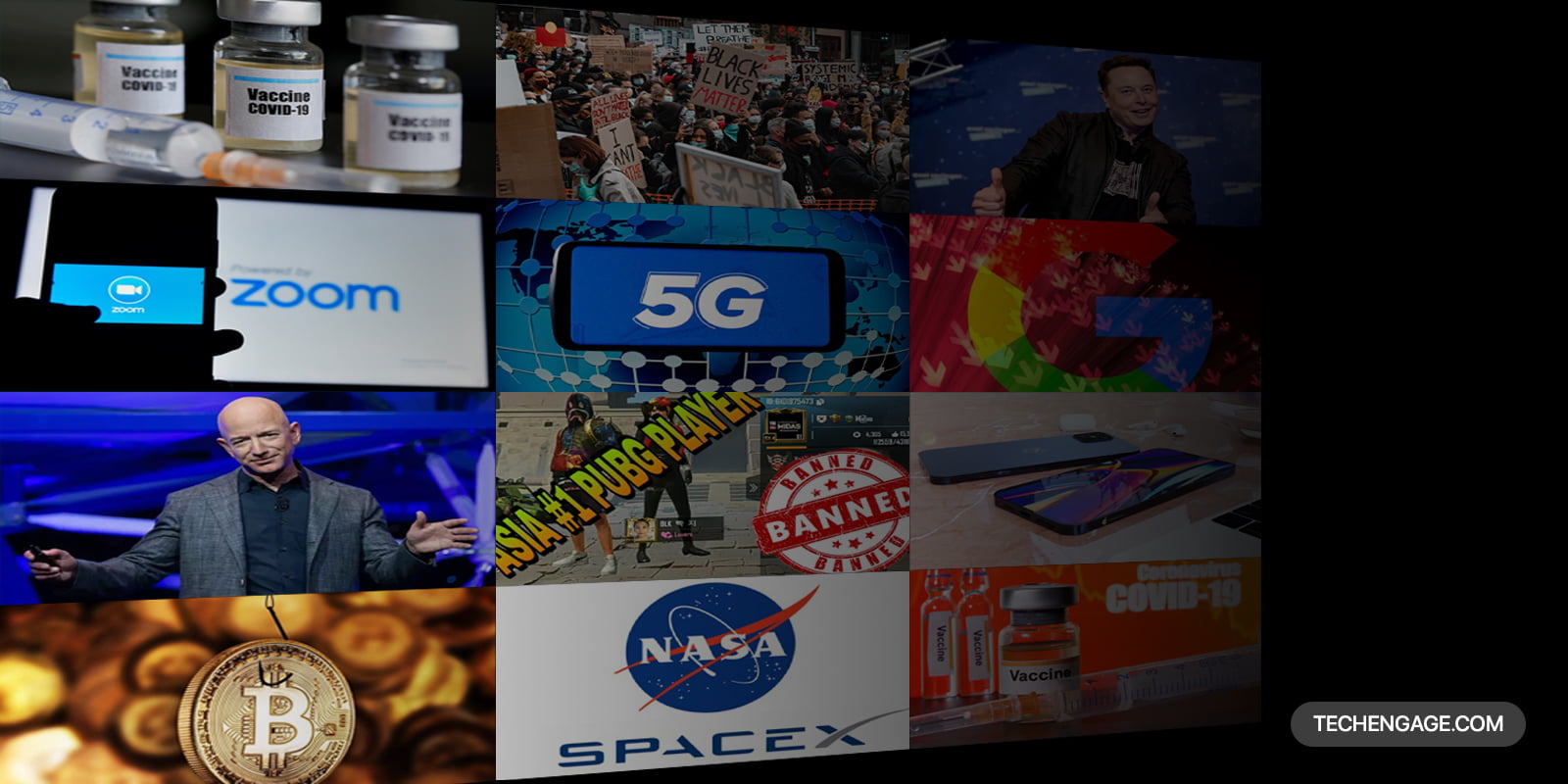 From the deadly pandemic to plane crashes, forest fires, fake death news, and appalling cases of suicides, the year 2020 remains unprecedented. Despite the challenges, the tech world kept flourishing, giving hope to many who felt lonely more than ever during the crisis.

This year, we have decided to round up the good news from the tech guys to end 2020 on a good, rather nostalgic note.

Here are some of our favorite tech news and trends that took everyone by storm (for good and the bad) this year:

Amidst May, the pandemic grew stronger than ever, and so did Jeff Bezos. The billionaire’s net worth increased by $28 billion, drawing him close to becoming the world’s first trillionaire. As expected, Amazon’s CEO had to face the wrath of Twitter, where people could not help criticize Bezos for his astounding net worth while others lost their jobs.

One of the most necessary yet significant changes that this year brought was the shifting of work, be it academic or professional to the digital space. Zoom meetings replaced in-person classes and office work. The majority did struggle initially since people were not as familiar with the app but gradually got the hang of it and started using it for virtual meet-ups with friends and family. Zoom also made it to our best work from home apps.

Since everyone was using social media more than ever, hackers had to make their presence felt. They targeted the Twitter accounts of some of the most followed CEOs, founders, and politicians. A bitcoin scam tweet was made from the official accounts of Elon Musk, Bill Gates, Barack Obama, and a few others. The scam was hard to get identified as a fraud, and many lost a significant amount from their digital currency.

Police brutality is not unknown to many in the States. The killing of George Floyd by two policemen served as the last nail in the coffin, and a series of humongous protests followed. Leaked videos showing similar instances from a police station infuriated the masses, and several companies like Target, Facebook, and Google came to support the movement by aiding the nationwide protests.

5. 5G finally made it to iPhone

The idea of 5G has gotten us hooked to it for quite some time now, and the curiosity only grew stronger. Thanks to Apple, the network companies working on this top-notch connectivity finally launched across the United States, and iPhone 12 got it within no time. Although most of the people were bound to stay at home, the wider connectivity network is a major win for the tech world.

Just when people from literally all ages and walks of life were starting to get hooked to the compelling video game, the government of Pakistan and India placed a ban on it. A series of complaints from the concerned parents who were tired of watching their kids hung up on the game 24/7 was the stimulant. The game was banned in India for some time afterward, of which the efforts of dedicated gamers and bloggers restored it.

TikTok, one of the fastest-growing social media apps, was also banned in few countries due to security, quality, and political concerns. The United States has also banned the short video app for ties with China and forced it to sell its stake to a U.S based company.

One of the most talked-about missions by SpaceX and NASA intended to start a to-and-fro journey for people to Space finally launched its first operation. The crew carried a total of four astronauts from NASA and the Japanese Aerospace Exploration Agency (JAXA). If the initial six month testing period is successful in achieving its goals, it is speculated that the flights to space could kick off within the next couple of years.

Right after the much-heated debate on the perils of Jeff Bezos nearing to become a trillionaire, Tesla’s CEO steals the world’s second-richest person spot from Bill Gates. Just at the beginning of 2020, Musk stood in the 28th position in the Bloomberg Billionaires Index. Tesla’s $7.2 billion surge increased the net worth of the overzealous billionaire by $100 billion.

9. Google services experienced a massive outrage around the globe

For the very first time, Google services, including Google Docs, Gmail, Google Play Store, Google Photos, and YouTube, went down or hung up abruptly. Although such abruptions are not new, it was all of the Google services shutting down together that concerned the masses. Although we all are aware of our increased reliance on Google apps, the outrage indeed did serve as a reminder.

This year was one heck of a roller coaster ride for people from all walks of life around the world. Where technology promised to connect people while they were isolating, it won’t be wrong to say that the loss of human interaction did leave a significant impact on all of us.

With digital space being used more than ever, let’s hope that the next year brings heaps of good news and cutting-edge technology we all are dying to get our hands-on.