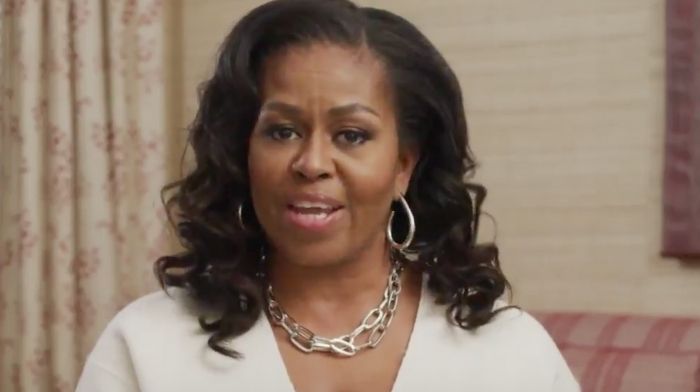 For someone who has long claimed to despise politics, former First Lady Michelle Obama sure does seem to participate in a lot of political events. She did so once again on Sunday, when she closed out a star-studded “Celebrate Georgia!” drive-in concert event by giving an impassioned plea to voters to support Democrat candidates in Tuesday’s run-off election.

“There are a lot of people out there who are counting on you to sit this election out,” Michelle said via video message. “But if you take charge of your power, you and the folks in your community can determine the direction of this state and this country.”

“Thousands of people from Savannah to Augusta to Atlanta have already voted,” she added. “And we’re counting on you to talk with your friends and family about making a plan to vote on Election Day.”

This event was hosted by Michelle’s When We All Vote, a nonprofit organization launched to increase voter participation. Though the former First Lady has long claimed that the organization is bipartisan, it’s clear to anyone with half a brain that the real goal of the non-profit is to increase Democratic voting.

“I know that we can count on you because you all are leaders when it comes to voter participation,” Obama said. “When we all vote, we make sure we’re the ones shaping our future.”

Our co-chair @MichelleObama is counting on YOU to advocate for your community at the ballot box in the historic U.S. Senate runoffs.

Make a plan to use the power of your voice at the polls tomorrow: https://t.co/eIIDQVqnBI pic.twitter.com/jexxuMo08M

Nazar Turner told Yahoo News that she brought her teenage daughter event to both see the artists and stress the importance of voting.

She went on to add that it meant everything to her to hear Michelle speak.

“She was our first Black first lady,” she said. “Her speech for my child is building importance in our lineage. She knows by the time she’s 18 she has to vote.”

The Georgia runoff elections will determine which party has control of the Senate for the next two years. Many would say the stakes of an election have never been higher.

This piece was written by James Samson on January 4, 2021. It originally appeared in LifeZette and is used by permission.