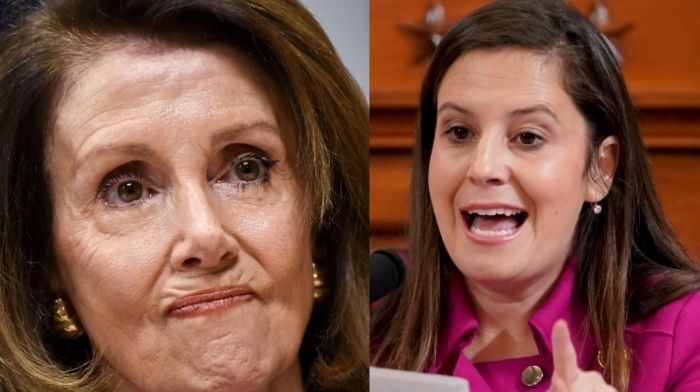 Republican congresswomen from New York are speaking out this week to blast Speaker of the House Nancy Pelosi (D-CA) for her proposal to eliminate gendered language from the official House rules.

“Instead of reviving the economy, restoring our Constitutional freedoms and delivering results for the American people, Speaker Pelosi has chosen her debut legislation — which would ban words like mother, sister and daughter,” Rep. Elise Stefanik told The New York Post. “Obviously she is triggered by the historic number of GOP women elected to Congress who will fire Nancy Pelosi once and for all in 2022.”

“There are millions of Americans suffering, our economy is hurting, vaccine distribution is lagging and Nancy Pelosi and the House Democrats are worried about this nonsense,” she said. “Here’s a gender neutral word to describe this legislation: ridiculous.”

This comes after Pelosi proposed changes to the rules of the House of Representatives that would “honor all gender identities” by eliminating such specific terms as mother and father, son and daughter, and aunt and uncle.

Only gender-neutral terms like “parent,” “child,” “sibling” and “parent’s sibling” would be allowed in the text of the House rules going forward, should Pelosi get her way.

Pelosi has bragged about the new rules, calling them “the most inclusive in history.” An insider said that the proposal over the rule change likely originated in the House’s Office of Diversity and Inclusion. This agency was launched by Democrats in one of their first acts at the start of the previous Congress.

“This office is charged with submitting to Congress a diversity plan to direct and guide House employing offices to recruit, hire, train, develop, advance, promote, and retain a diverse workforce,” reads the official about page of the agency.

The rule changes have even been touched on in the Georgia Senate runoff election, with Republican Kelly Loeffler warning that they were reason enough to vote for her.

“The far-left’s priorities, everyone. If you’d like to still be able to call yourself a father, daughter, mother or son, vote for me and @Perduesenate on Tuesday,” she tweeted over the weekend, adding, “Sincerely, A Proud Daughter.”

Read Next: Pelosi Clashes With Reporter – Admits She Shifted To Supporting Relief Bill Because Of ‘New President’

This piece was written by James Samson on January 2, 2021. It originally appeared in LifeZette and is used by permission.