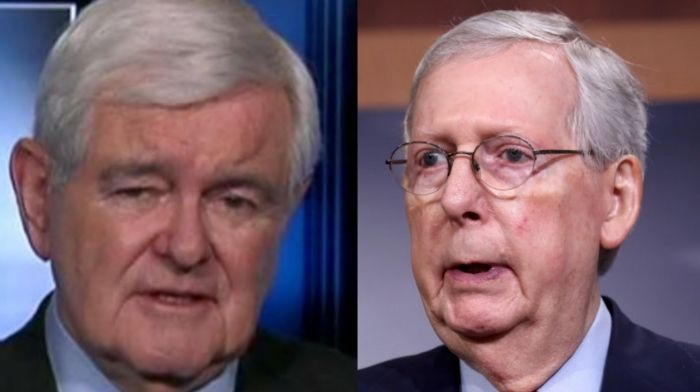 Former Speaker of the House Newt Gingrich spoke out on Wednesday to beg Senate Majority Leader Mitch McConnell (R-KY) to set up a vote on the $2,000 coronavirus stimulus checks, warning that Republicans will lose their Senate majority if he does not.

Gingrich told Fox News that it is absolutely crucial that the $2,000 stimulus checks are brought up as a stand-alone vote before the Georgia runoff elections on January 5. These elections are going to determine which party has control of the Senate in the coming two years.

Sens. David Perdue (R-GA.) and Kelly Loeffler (R-GA.), who will face off against Democrats Jon Ossoff and the Rev. Raphael Warnock, have both voiced their support for the stimulus checks.

“I would beg him to bring up $2,000 payment as a free-standing independent vote, and have people like Sen. Loeffler and Perdue come back and vote for it,” Gingrich said. “Take it off the table as an issue because, frankly, Warnock and Ossoff could be in favor of the $2,000 unit and can attack Mitch McConnell for the next six days, and I think it’s very hard at that point to win the race.”

“The long term control of the U.S. Senate lies in Georgia,” Gingrich added. “Both Georgia senators have endorsed the $2,000 payment that President Trump has proposed, and Mitch ought to bring it up with a clean vote. I really am very worried that if he plays a clever parliamentary game, it may look good inside the Senate but it could cost us two Senate seats and control of the Senate.”

This comes after we reported that Gingrich had voiced his support for the stimulus checks being handed out because he believes they will be crucial to helping the middle class through this crisis.

“This is like being in World War II,” Gingrich said while appearing on “Fox & Friends.” “We have a disaster in this country made dramatically worse by Democratic governors in places like California, Illinois, New York who have been crushing small business, killing the restaurant industry.”

“You know, the big losers have been middle-class Americans,” he added. “The big winners have been the very rich and government employees who got paid for not doing any work, including millions of members of the teachers union who didn’t do any work, but got … collectively billions of dollars for sitting around.”

Related: Newt Gingrich Reveals Why Middle Class Have Been The ‘Big Losers’ In Pandemic

“So, I think if you are an average everyday person, you look at all of this mess, and you think the government has clearly not done its job, particularly the state governments led by Democrats, and $2,000 will help me. I think that’s what’s going on,” Gingrich continued. “[T]his is not about deficit spending. That train is long gone. We’re in the middle of a disaster. I think the average American deserves some help.”