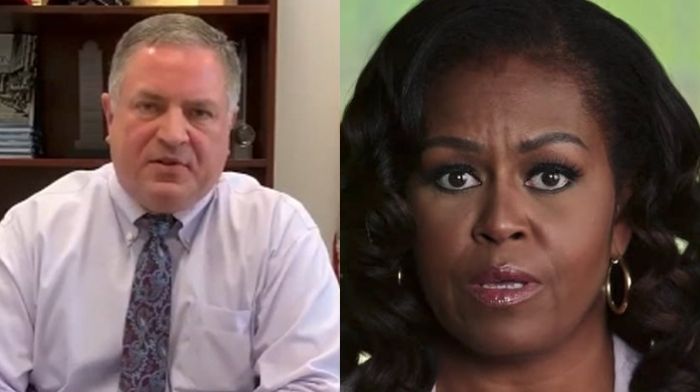 Calls are growing for a Houston city councilman to resign simply posting an unflattering meme of former First Lady Michelle Obama, but instead of backing down, he’s speaking out to defend himself.

In the screenshots, Travis can be seen responding to a comment from local businesswoman and former city council candidate Laurie Robinson, who had pointed out that Michelle went to Harvard.

“It’s called Affirmative Action. Doesn’t take much—she was born with her qualification. She isn’t the brightest bulb in the lot,” Travis wrote in response. He went on to also bring Kamala Harris into the conversation.

“And let’s not talk about Kamala—her qualification is that she sleeps with powerful men,” he said. “And don’t bring up Hillary. Please, she would be nothing without Bill and she had to cover up for him raping those five women. Feminism is dead on the left. These three helped to kill it.”

Travis Refuses To Back Down

Despite the backlash he has received, Travis defiantly told KPRC2 that he would not be resigning.

“There’s a difference,” Travis added of Melania and Michelle. “I think one is classier. One is not.”

When pressed on this by reporters, he replied, “Well, I just think that one represents the first lady ideal. Michelle Obama has always been too political for me.”

Related: Trump Livid That Melania Hasn’t Been On Any Magazine Covers While Michelle Obama Was On 12

As for affirmative action, Travis said, “You don’t get Affirmative Action if you’re white.”

Despite the many careers that cancel culture mobs like the one after Travis have destroyed, he doesn’t think he’s going anywhere.

“What’s trying to be done to me is to cancel me out,” he said. “It’s not going to work. When people do that I just fight even harder.”