U.S. And EU Condemn Jailing Of Lawyer Who Reported On Coronavirus In Wuhan 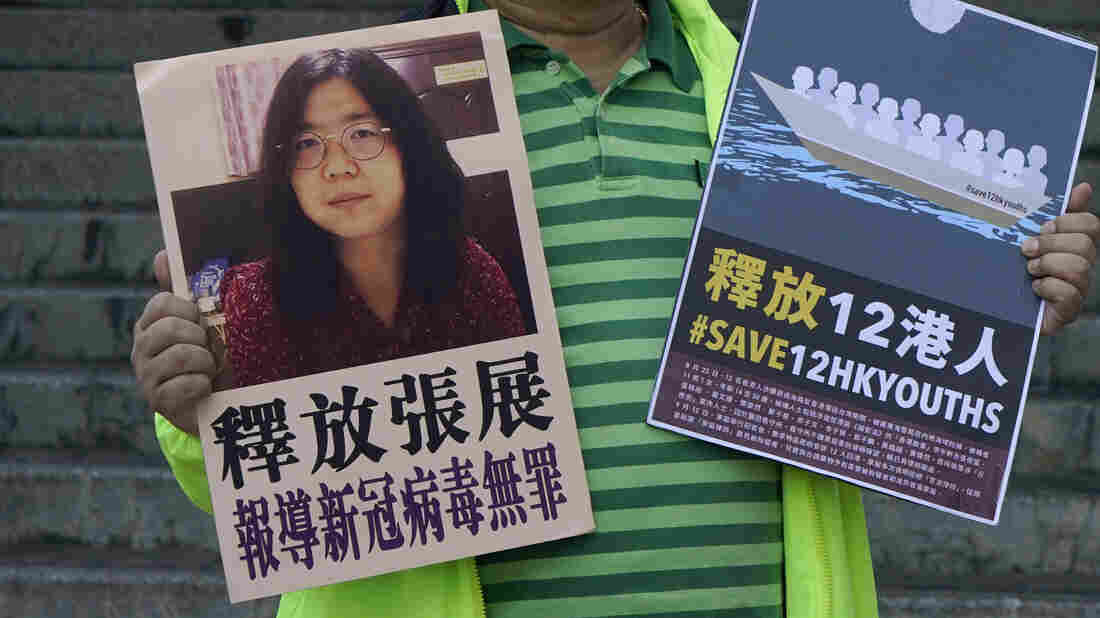 A pro-democracy activist holds placards with the picture of Chinese citizen journalist Zhang Zhan outside the Chinese central government’s liaison office, in Hong Kong, Monday. Activists demand the release of Zhang, as well as the 12 Hong Kong activists detained at sea by Chinese authorities.

She was a lawyer. But when the coronavirus began raging in Wuhan, China, Zhang Zhan started reporting as a citizen journalist — offering a candid look at the situation on the ground.

Then, after months of sharing videos and text updates on WeChat, Twitter and YouTube — the 37-year-old’s social media feeds went dark in May. Authorities detained her, claiming she was spreading lies, according to The New York Times.

And on Monday, she was sentenced to four years in prison. One of Zhang’s attorneys said she was convicted of “picking quarrels and provoking trouble,” according to The Associated Press.

On Tuesday, the EU, U.K. and U.S. all expressed outrage at her imprisonment.

“The United States strongly condemns the People’s Republic of China’s (PRC) sham prosecution and conviction of citizen journalist Zhang Zhan on December 28,” Pompeo said in a statement. “We call on the PRC government to release her immediately and unconditionally.”

“The rest of the world relied heavily on uncensored reports from citizen journalists like Zhang to understand the true situation in Wuhan,” he added. “Her hasty trial, to which foreign observers were denied access, shows how fearful the [Chinese Communist Party] is of Chinese citizens who speak the truth.”

In a statement, the EU’s embassy in Beijing also condemned Zhang’s treatment and called for her release, among others.

While detained, Zhang refused to eat as a-form of protest, The Times reported. According to her lawyer, she was brought into court in a wheelchair, having lost a significant amount of weight. Her mother sobbed after the sentencing.

Other journalists — whose accounts sometimes differ from the narrative offered by the government — have gone missing in China.

At least three other citizen journalists disappeared abruptly from Wuhan after sharing updates from the field, according to The Times. Two of them, Chen Qiushi and Li Zehua, were reportedly later released, but the third, Fang Bin, remains missing.

The conviction “raises serious concerns about media freedom in China” the British Embassy said in a statement. More than 47 journalists have been detained in China related to coronavirus reports, the embassy said.

“A British diplomat tried to attend her trial, but was not allowed access,” the statement continued. “We urge China to release all those detained for their reporting.”