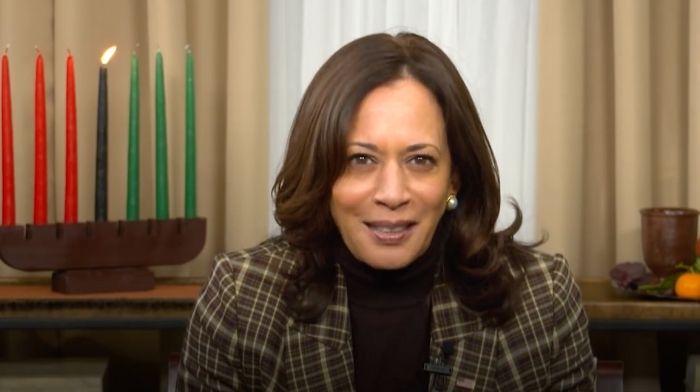 Kamala Harris took to social media over the weekend to post a video celebrating the holiday of Kwanza, but it did not take long for this to blow up in her face, as she was slammed for shameless political pandering.

In her video, Harris claimed that she grew up celebrating Kwanzaa, and that “multiple generations” of her family also celebrated the African holiday that was first celebrated in 1966. Here’s what she had to say:

“You know, my sister and I, we grew up celebrating Kwanzaa Every year our family would – and our extended family, we would gather around, across multiple generations, and we’d tell stories.

The kids would sit on the carpet and the elders would sit on chairs, and we would light the candles, and of course afterwards have a beautiful meal. And, of course, there was always the discussion of the seven principles. And my favorite, I have to tell you, was always the one about self-determination, kujichagulia.”

And that principle motivates me today, as we seek to confront the challenges facing our country and to build a brighter future for all Americans. So, to everyone who is celebrating, Happy Kwanzaa from our family to yours.”

This immediately backfired on her when social media users roasted the video, accusing Harris of blatant political pandering.

“Might be the most epic pandering I’ve ever seen from a politician,” one user commented, with another adding, “Somehow I find it hard to believe that she has a deep childhood attachment to a holiday that didn’t exist when she was born.”

“[T]his is such an obvious lie. She was born in 1964..Kwanzaa was created in 1966. It didn’t really take hold until the late 70s and early 80s. For her whole family to be devoted to it in her childhood is incredibly unlikely… she’s a liar,” a third user wrote.

Related: Trump Says Kamala Harris Is A ‘Monster’ And A ‘Communist’ Who Will Replace Biden ‘Within Months’

A fourth tweeted, “We ‘Jamaicans’ do not celebrate Kwanzaa. Also, being first-generation myself, I’m confused as to how you could celebrate with multiple generations. This is such a fake post, I understand it’s intent, but please do not be fake about it. Just say happy Kwanzaa.”

“Considering that Kwanzaa was invented in 1966 and Harris was born in 1964, I highly doubt her family ‘across multiple generations’ would have celebrated the holiday,” someone else commented. “This just comes across as another one of her lame attempts to sound human and in touch with the average voter.”

Nice try, Kamala, but it looks like this was yet another fail for you!

This piece was written by James Samson on December 28, 2020. It originally appeared in LifeZette and is used by permission.

Read more at LifeZette:
Trump Livid That Melania Hasn’t Been On Any Magazine Covers While Michelle Obama Was On 12
Ted Nugent Eviscerates Black Lives Matter – Rips Protests As ‘Soulless’ And ‘Stupid’
Maxine Waters Outrageously Claims Trump Has Been ‘Compromised’ By Putin – Calls On Us To ‘Rely On Biden’ To Take On Russia And China