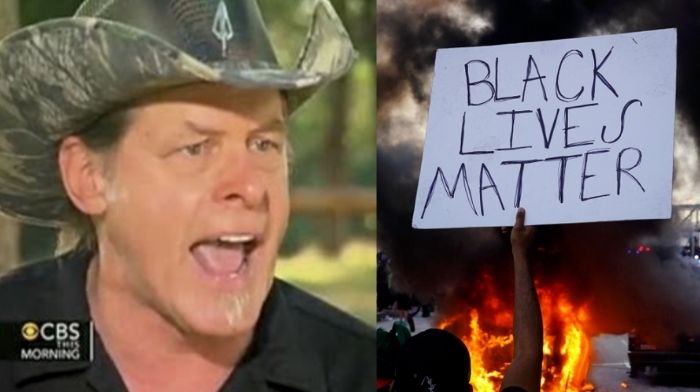 In the radically liberal entertainment industry, it’s rare to find anyone that is brave enough to actually speak out against the Black Lives Matter organization. That’s why it came as a surprise on Sunday when the rocker Ted Nugent spoke out to do just that!

While appearing on Sinclair’s “America This Week,” Nugent ripped into people who kneel during the national anthem or protest with the Black Lives Matter movement, saying that they are “soulless” and “stupid.”

“I love hearing the Star-Spangled Banner,” began host Eric Bolling. “Let’s talk a little bit about what’s going on in the country … You see them kneeling when as the song is being played, you see them disrespecting the flag that is on my chest and probably on your arm. What does that do to Ted Nugent?”

Referring to the “hands up, don’t shoot” slogan that Black Lives Matter has adopted, Nugent said:

“I identify those people as being real soulless, real stupid. They don’t even know what they’re doing. I mean, they claim that somebody’s hands were up, and they got shot. That’s a lie. I know the situation. I’ve studied those situations, and nobody’s hands were up, and nobody got shot. So the entire premise of that so-called protest is based on a lie.”

“And they can’t be that stupid. They know it’s a lie,” he added. “They’re just liars. So when you see someone disrespecting our flag, um, they don’t deserve any respect themselves, and they should be ashamed of themselves.”

Many would argue that Black Lives Matter is actually a Marxist political organization that uses race as a shield to push their radically leftwing and anti-American agenda. Calling out this organization in the liberal entertainment world means putting your career at risk, but Nugent doesn’t seem to give a hoot about that!

Earlier in this same interview, Nugent attacked Joe Biden and other Democrats for “glaring criminality and abuse of power and marxism.” It’s rare to see a conservative celebrity who actually has the guts to speak his mind in this way. If only there were more stars as brave as Ted Nugent!

Read Next: Ted Nugent And Bill Maher Join Together To Combat Violent Rhetoric

This piece was written by James Samson on December 27, 2020. It originally appeared in LifeZette and is used by permission.