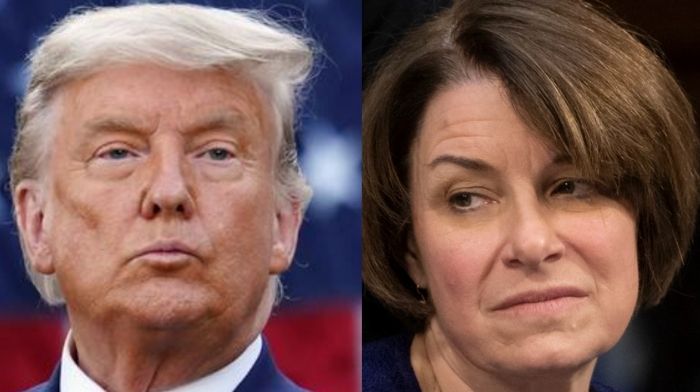 Failed Democratic presidential candidate Amy Klobuchar (D-MN) went on CNN on Wednesday to blast President Donald Trump over his latest round of pardons.

The Democratic senator went so far as to claim that Trump is “literally burning down the house of justice as he walks out the door” with these pardons, which she claims are being handed down to people mostly related to him and “his own political interests.” She called Trump’s pardons “a travesty.”

“Well, 88% of them — a study was done — of his pardons are somehow related to Donald Trump’s interests or to his own political interests,” Klobuchar said of the pardons.

“So, when you look at them, even though they all seem different, as you point out, about murderers, about money laundering, about a Congress using campaign funds to send his pet rabbit on a trip — true fact — when you look through all of them, what ties them together is corruption,” Klobuchar continued. “It is corruption. And so, when you think of the pardon power, that is supposed to be about forgiveness and mercy.”

Related: Klobuchar Threatens Republicans With ‘Wrath’ If They Don’t Cave To Vote-By-Mail Demands

“He uses this to help out his buddies,” she added. “And, by the way, he’s literally burning down the house of justice as he walks out the door. all the work of law enforcement, of FBI, of prosecutors … career people who worked on these cases so hard to take care of white-collar criminals. He basically is telling them no, demeaning their work.”

“He’s literally burning down the house of justice as he walks out the door,” Sen. Amy Klobuchar says about President Trump’s flurry of controversial pardons. https://t.co/ciZLdIbu1y pic.twitter.com/Ar5iHH19OU

Klobuchar made similar claims against Trump during a Tuesday night MSNBC appearance in which she accused the president of “trying to burn this country down on his way out” by not supporting the coronavirus stimulus bill that was passed by Congress on Monday.

“This was a hard fought negotiation,” Klobuchar said. “Democrats were pushing for more funds for the individual payments, but in the end, this was a negotiation, and he knows very well we’re reaching the end here with unemployment … our small businesses can’t take it anymore.”

“But he should not be doing this right now when his own treasury secretary, Steve Mnuchin, was involved in the negotiations from the beginning to end,” she added. “He is literally trying to burn this country down on his way out.”

Amy Klobuchar just went on MSNBC to call raising the stimulus to $2,000 per person “an attack on every American” and suggests Congress override Trump’s veto. pic.twitter.com/mEdDUY9dNu

This piece was written by James Samson on December 24, 2020. It originally appeared in LifeZette and is used by permission.